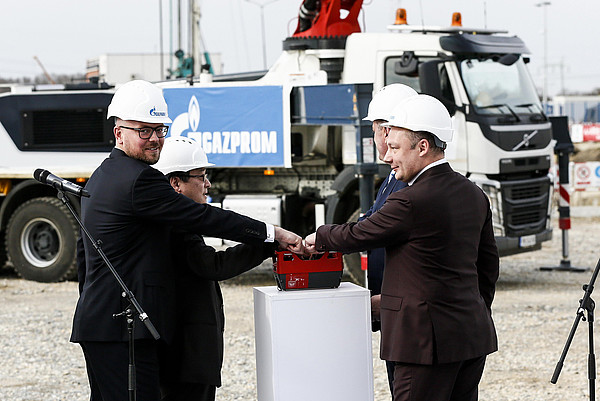 Kirill Tyurdenev and Denis Fyodorov in foreground, Hua Xingsheng, Vice Chairman of Supervisory Board of Shanghai Electric Group, and Aleksandar Antic in background

An event celebrating the launch of construction of a combined cycle thermal power plant (TPP) took place today in Pancevo, Republic of Serbia.

Taking part in the event were Aleksandar Antic, Minister of Mining and Energy of the Republic of Serbia, Denis Fyodorov, Director General of Gazprom Energoholding, Kirill Tyurdenev, Director General of NIS a.d. Novi Sad, and representatives of contracting organizations and municipal authorities of Pancevo.

With a power capacity of some 200 MW, the Pancevo TPP will be the first of the Gazprom Energoholding Group’s projects to be implemented outside of the Russian Federation, as well as the first combined cycle thermal power plant in Serbia.

The TPP’s two-hectare construction site is located in an industrial district in the immediate vicinity of the Pancevo Refinery that belongs to NIS a.d. Novi Sad (part of the Gazprom Neft Group). The heat generated by the TPP will serve the needs of the Pancevo Refinery, while the plant’s electric power output will be sold in Serbia and neighboring countries. The Pancevo TPP is slated for commissioning in 2020.

During the event, Denis Fyodorov and Aleksandar Antic signed a Memorandum of Understanding on the implementation of combined heat and power generation projects in the Republic of Serbia. The document provides for joint efforts aimed at reviewing further options for building and upgrading power plants in Serbia.

The construction of the Pancevo TPP is carried out jointly by the Gazprom Energoholding Group and NIS a.d. Novi Sad (part of the Gazprom Neft Group). In June 2015, the companies signed a shareholders agreement to form a joint venture, Serbskaya Generaciya d.o.o. Novi Sad. The share of the Gazprom Energoholding Group in this company is 51 per cent and that of NIS a.d. Novi Sad is 49 per cent. A wholly-owned subsidiary of this company, TE-TO Pancevo d.o.o. Pancevo, was created to manage the construction of the Pancevo TPP.

The primary investor in the construction of the Pancevo TTP is the Gazprom Energoholding Group.

In October 2017, Shanghai Electric Group won the tender and was selected as the contractor for turnkey construction of the TPP’s combined cycle power unit. The core equipment of the Pancevo TPP will include two Ansaldo Energia gas turbines and one steam turbine. Combined cycle power units offer a number of remarkable economic and environmental benefits compared to conventional steam and coal power-generating equipment. Unlike traditional power units, which in Serbia run on brown coal, combined cycle power units do not produce tons of waste ash or air emissions of particulate matter and sulfur oxides.

In June 2018, the Gazprom Board of Directors approved the Company’s power generation strategy for 2018–2027. The document provides for, among other things, the diversification of Gazprom’s power business by entering promising foreign markets.

Gazprom Energoholding, a wholly-owned subsidiary of Gazprom, is a special-purpose company that manages the companies of the Gazprom Group in the power generation sector. Its main production assets are Mosenergo, TGC-1, OGK-2, and MOEK. Gazprom Energoholding is the leader in heat and power generation among domestic heat producing companies. Its plants generate about one-sixth of all electric power in Russia’s Unified Energy System. 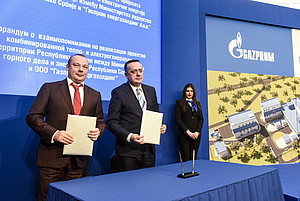 Denis Fyodorov and Aleksandar Antic during signing of Memorandum 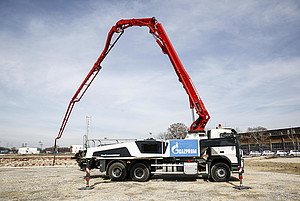 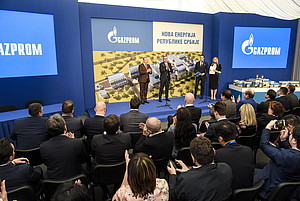