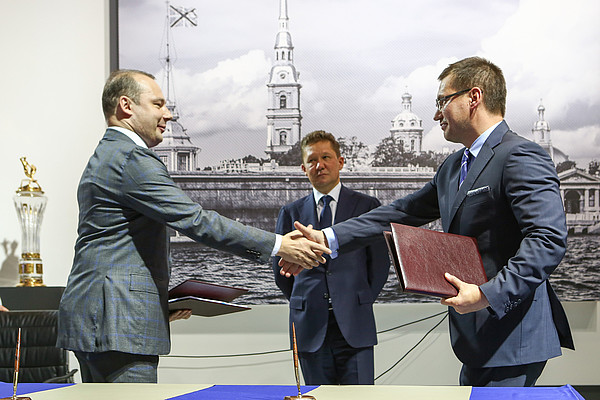 Tsentrenergoholding (part of Gazprom Energoholding Group) and NIS Novi Sad (Gazprom Neft Group) signed a Shareholders’ Agreement today as part of the St. Petersburg International Economic Forum 2015. The Agreement stipulates that a company (Serbskaya Generaciya Novi Sad) will be set up to deal with the project for constructing a Thermal Power Plant (TPP) with the total capacity of 140 MW and a possible capacity creep up to 208 MW in Pancevo (Republic of Serbia).

According to the Agreement, Tsentrenergoholding will own a 51 per cent stake in Serbskaya Generaciya Novi Sad and NIS Novi Sad will take 49 per cent.

It is planned that the TPP will primarily supply electricity and heat to the NIS refinery and, possibly, to NIS strategic partner — HIP Petrohemija petrochemical plant, both based in Pancevo. The rest of generated electricity will be marketed in the Serbian power market.

The TPP will be built using a combined cycle technology that will produce the best economic and environmental results. This technology provides high efficiency and, accordingly, low fuel consumption that will allow bringing down potential costs of power supply to HIP Petrohemija. The new TPP will use natural gas as the main fuel. By now, the TPP design is ready and documents for the future construction site are approved.

The TPP construction is expected to start in 2015 and the commissioning — in 2018. EUR 140 million is to be allocated to the project and the bulk of investments will be provided by Gazprom Energoholding Group.

Tsentrenergoholding and NIS Novi Sad signed the Memorandum for the TPP construction in Pancevo (Serbia) in September 2013.

Gazprom Energoholding is a vertically integrated holding (wholly-owned subsidiary of Gazprom) responsible for managing Gazprom Group’s power generating companies (majority stake owner in Mosenergo, TGC-1, OGK-2 and MOEK) in compliance with unified corporate standards. Group’s power generating companies own and manage the work of over 80 power plants with an aggregate installed electrical output of nearly 38 GW (thermal output — over 70 thousand Gcal/h). In particular, the Group’s companies provide electricity and heat to Moscow and St. Petersburg as well as to some economically developed Russian regions.

NIS Novi Sad is a leading vertically integrated energy company in Southeastern Europe. Its major business lines are the oil and gas exploration, production and processing and petroleum products sale. Gazprom Neft has a 56.15 per cent stake in NIS and the Republic of Serbia Government — 29.88 per cent. NIS owns an oil refinery with two sites in Pancevo and Novi Sad (Serbia).