Gazprom energoholding Serbia, on the occasion of the 75th anniversary of Victory in the Second World War, completed restoration works on the monument to Soviet soldiers in the town of Starcevo (located in the vicinity of Pancevo) who lost their lives in the struggle for the liberation of Yugoslavia. Before restoration, the monument, which was built by locals in 1945, was in a very dilapidated condition. The company completely renewed the monument, actually restoring its original shape.

The ceremony of the restored monument opening and laying of flowers was held on May 8th. It was attended by the Minister of Labor, Employment, Veteran Affairs and Social Affairs of Serbia Zoran Djordjevic, Deputy Mayor of the city of Pancevo Predrag Zivkovic, Director of Gazprom energoholding Serbia TE-TO Pancevo LLC Alexander Varnavskiy, as well as the representatives of the Russian Embassy in Serbia.

More than 300,000 Soviet soldiers took part in the battles against the occupiers on the territory of Yugoslavia. The city of Pancevo was liberated by the 49th Guards Rifle Division under the command of General Vasily Margelov on October 6, 1944. 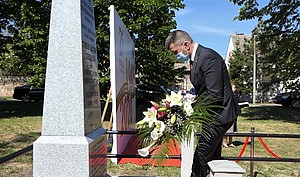